A new installation of our Curyatid art series has set sail.

This video piece is the newest addition to our ongoing art series, Curyatid. Writ large on a two-story digital column outside our New York store, the works are by female and gender nonconforming artists commissioned by a microgrant from Forty Five Ten. The series’ title is a portmanteau of “curated” and “caryatid ,” a type of stone carving in the form of a draped female figure that functions as a column in classical architecture.

Globus’ new piece was made especially for the project. (She’s previously exhibited in major exhibitions around the world, including The Whitney Museum of American Art, The New Museum, Centro De Arte Reina Sofia, and the Liverpool Biennial. Stereo follows the movement of a series of waves in slow motion, concentrating on their forms in contemplative detail. In doing so, Globus calls viewers to meditate on the present moment and remove themselves—if only for a moment—from the urban bustle to the natural, cleansing undulation of the sea.

“We’re pleased to debut this work and feel that Stereo represents the fluid nature of creativity,” says Kristen Cole, our President and Chief Creative Officer. “This emotional and artistic freedom is reflected in Forty Five Ten’s support of multidisciplinary art collaborations and what’s possible when you follow the flow of inspiration.” 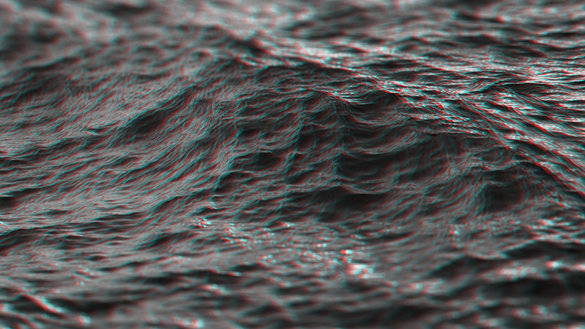 A still from Stereo that follows the movement of a series of waves in slow motion.